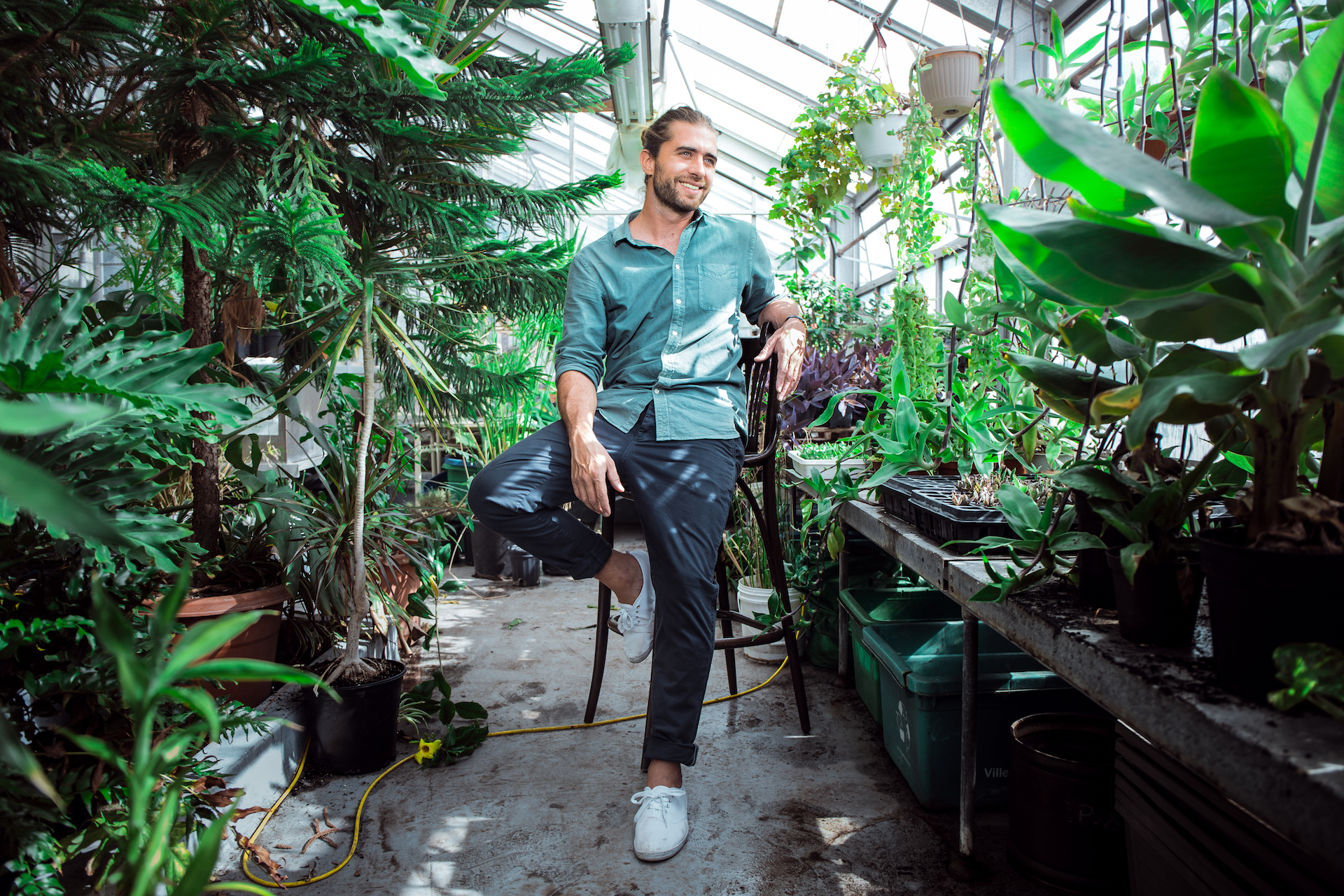 At Republik, we believe that all change takes a healthy dose of courage, the courage to dream for ourselves and for others.

In this content series, we will be presenting former work colleagues who represent the agency’s very essence by intrinsically embodying the values we hold dear.

These individuals gathered their courage to pursue their personal or professional dream and continue to inspire us long after their departure.

This is a tribute to them. 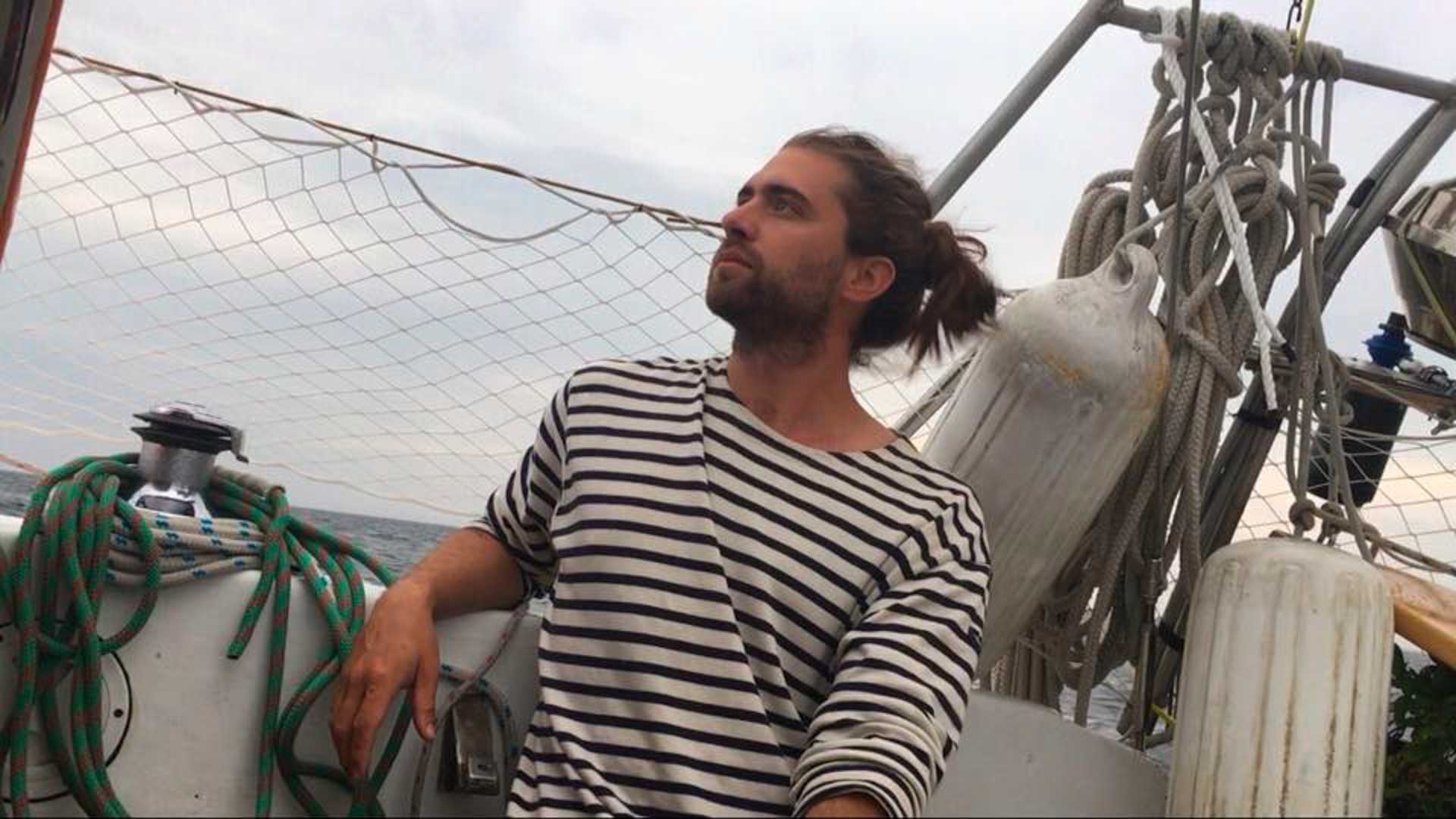 I worked with Pierre-Olivier (PO) at Republik from the fall of 2016 to the summer of 2018. He was our art director, but as in most good start-ups, he often wore other hats. He managed the entire creation team, sometimes as producer, but usually as graphic designer.

I worked on almost all the projects that came in during those two years. And I can tell you that when it comes to attention to detail and involvement in a project, PO never did things by halves. I’ve always admired that about him.

It was hard to get in touch with PO for this interview because he changes locations every week and doesn’t always have access to the Internet. That’s because Pierre-Olivier, his girlfriend Héra and their cat, Martin Léon, are currently living on a little orange sailboat called Loréline. (You can follow their adventures on Facebook.)

Finally, after several weeks and many messages, we were able to make it happen!

He is right in front of me, on the computer screen, in what looks like a yacht club, sporting a glorious moustache I had never seen on him before.

MANNY: Where are you now?

MANNY: And what are you doing there?

PO: First, we’re here because we’re having engine problems, so we’re looking to get that fixed. But the actual reason we’re in New York is because we set sail 125 days ago and this the place we’ve reached on our itinerary. 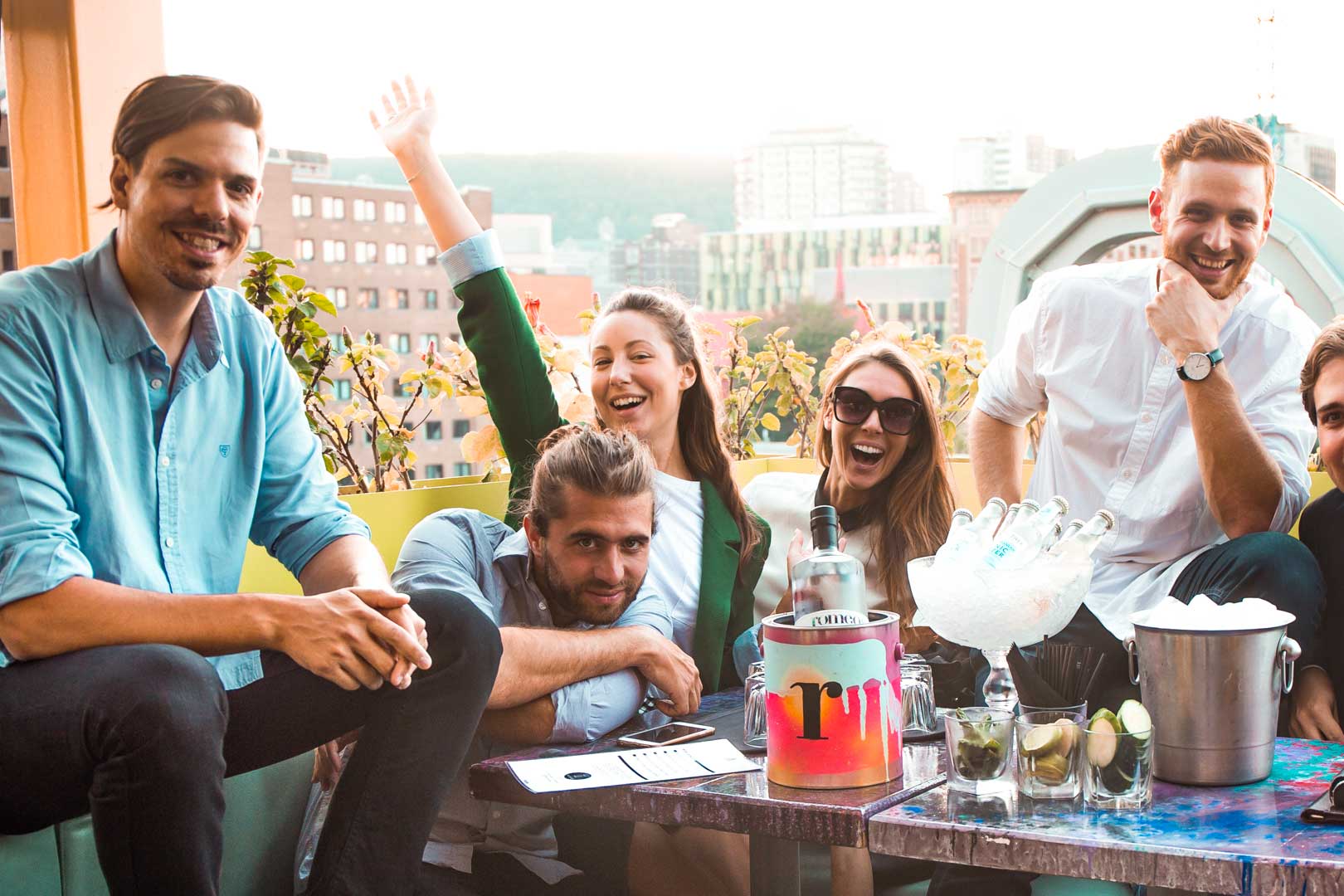 MANNY: Regarding Republik, what made you apply to the agency? What attracted you?

PO: Republik was a small agency with good clients, like Veuve Clicquot. After working at Urbania, I was looking for another job and wanted to stay in content creation. Republik was really a good fit and Vince practically said I had the job at the end of the interview. It all happened very quickly. We were a cozy team of four: Jess and I with the two bosses, Vince and JP. 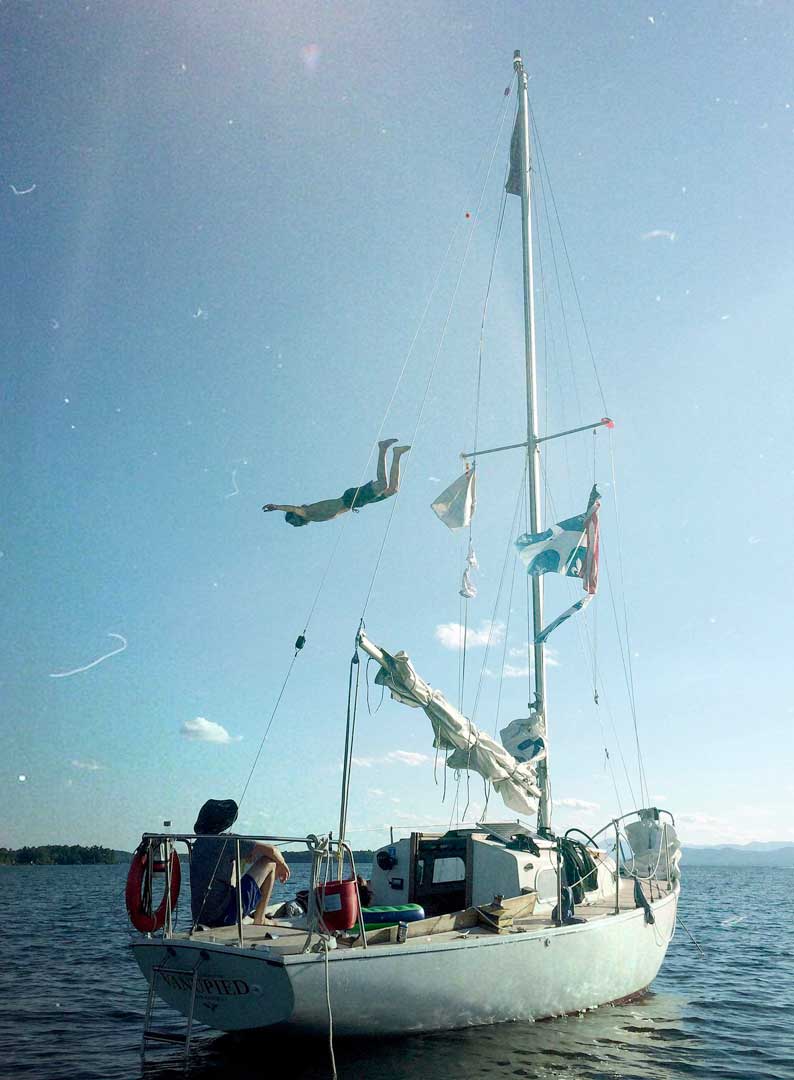 MANNY: What made you want to set sail? Did you already have this dream when you started working at Republik?

PO: I had been thinking about it for a long time. In fact, from the time I started boating, I knew that I would do it one day. It was clear to me that this trip would happen, no matter what. Truthfully, between the time I was at Urbania until I was hired at Republik, I also had a project with my previous boat. And if I hadn’t gotten the job at Republik, I would have gone on the trip anyway. So, yes, I’ve been thinking about it for 11 years. I had to make a move and I made the decision this year.

MANNY: What made you take the plunge?

PO: A relentless desire. I think I’ve been itching to take this trip for a long time and I didn’t want to wait to be further along in my career and relationship before doing it. If I had worked at Republic or been with my girlfriend for another two years, it might not have been the right time to do something crazy, especially at our age. I’m 30, after all, and we may want to settle down and raise a family one day. 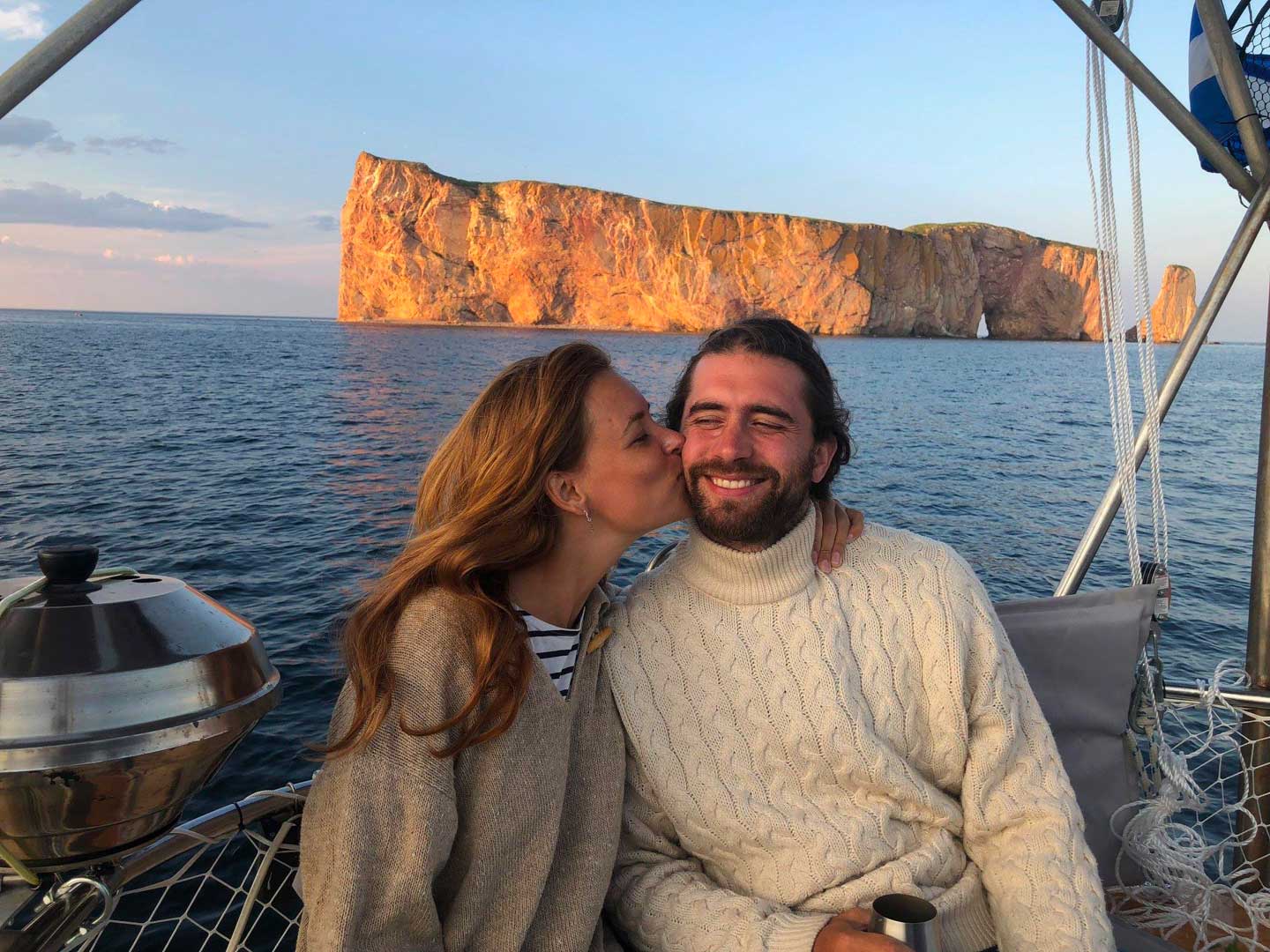 Pierre Olivier told me that at the beginning of his relationship with Héra, he made it clear that he wanted to go on a sailing trip one day. Surprisingly, she had the same item on her bucket list! What luck!

I was wondering why, in his case, it was so important to not only have dreams, but to make them come true. His answer:

PO: Good question. Because we only have one life to live? It’s fun to work—I like working—but there are also times when you have to go out and see the world. I wanted to be free of the clock, to feel that I had accomplished something, to learn things I never would have if I had stayed in the same city or the same office. 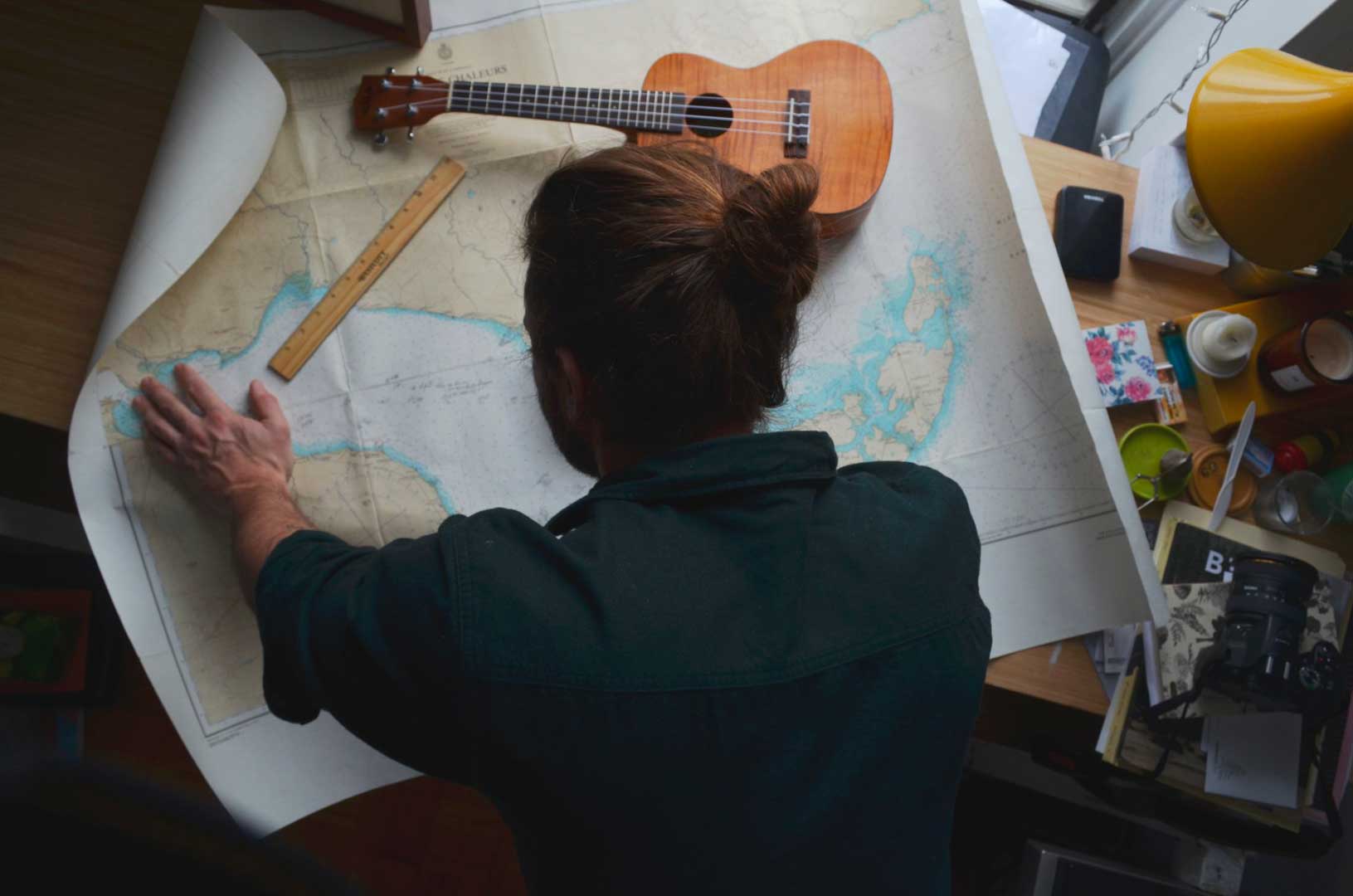 MANNY: Do you sometimes regret your choices?

PO: No. If I had to do it over, there are some things I would do differently based on what I’ve learned, like our current engine issues. But otherwise, I don’t regret anything I’ve done so far. This is the best trip I’ve ever taken. I followed the steps in the right order and didn’t skip any, so I’m confident of where I am right now and I wouldn’t trade places with anyone.

He explained that the trip has gone well up to now. That the first “problem” has been the engine breaking down on its 120th day. So far, he’s already seen and done some incredible things. He’s experienced life-marking moments, when he felt how much more powerful nature was than him and other moments that were supremely peaceful. He is learning to live very simply.

And what does he do, when faced with a sizeable challenge? “You can’t go back. You have to look ahead and put all your effort into solving the problem so that you can keep moving forward.” 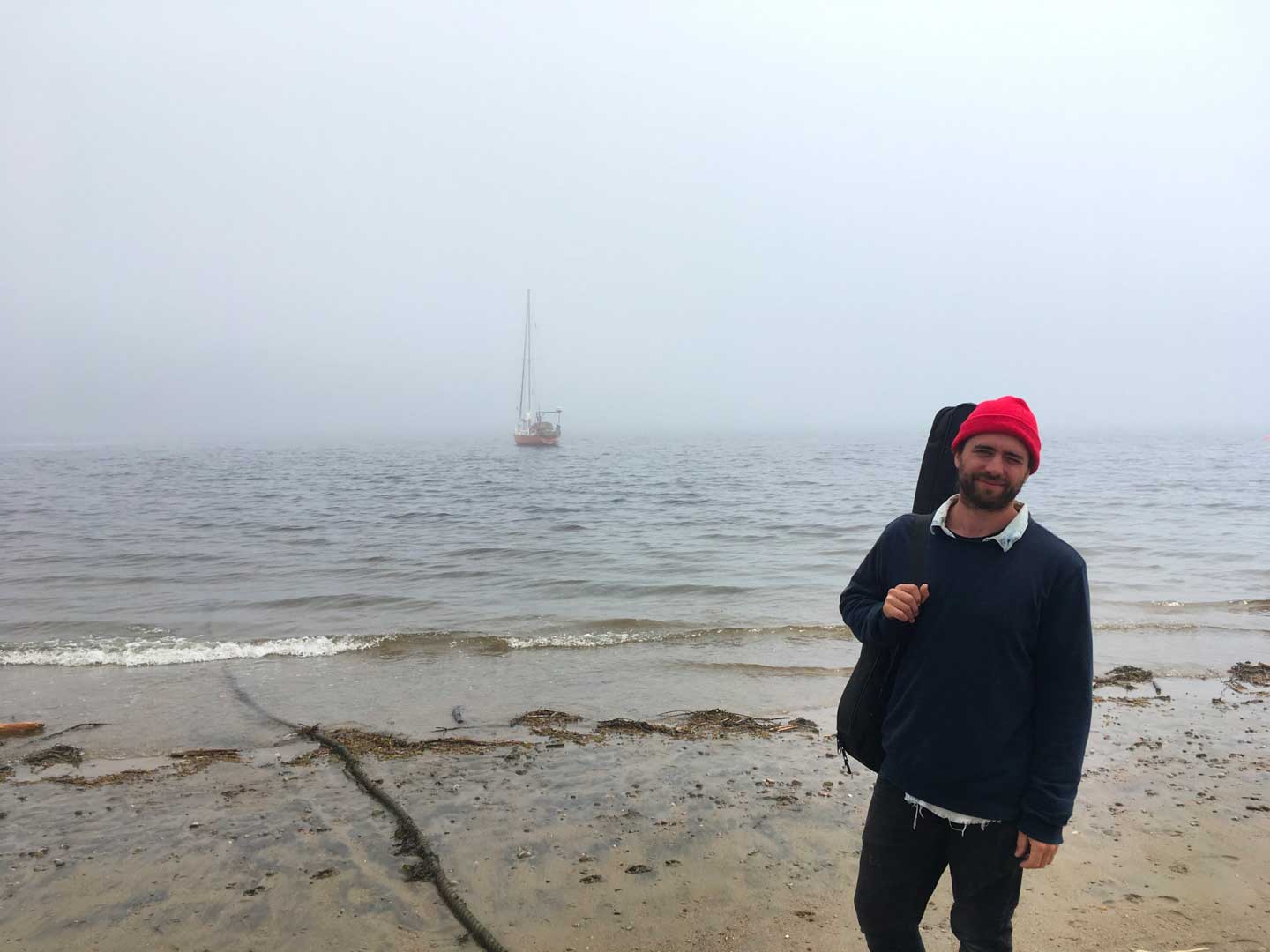 WE’RE ONLY PASSING THROUGH

I was reminded of the time when I was working with PO at Republik. He would always bring back small treasures from his village, like honey or maple syrup.

This man, who grew up far from the city, but close to nature is now 100% dependent on nature, on its waters and winds. What is his relationship with nature on this trip?

“We try to treat nature with the greatest possible respect. We’re crossing the ocean as visitors and don’t want to leave a trace. We simply want to see how larger-than-life and beautiful it is, nothing more. We are very lucky to be able to head out to sea, to admire the coasts, the shores, to see how nature shapes continents.”

AN AGENCY OF MOTIVATED PEOPLE

PO passed through Republik on the way to fulfilling his dream, but he furthered the business considerably during his short time here. The small, four-person agency on the second floor has moved to the seventh floor and has grown to more than 20 team members! We all share, in varying degrees, this desire to move things forward, and we know that it takes hard work and dedication.

MANNY: How do you think Republik helped move you closer to your dream?

PO: I learned to work hard over a long period to get results. That’s what I did in both cases, on my boat project and at the agency. Vince and JP aren’t scared to forge ahead. That’s something I emulated to make my sailing trip happen. 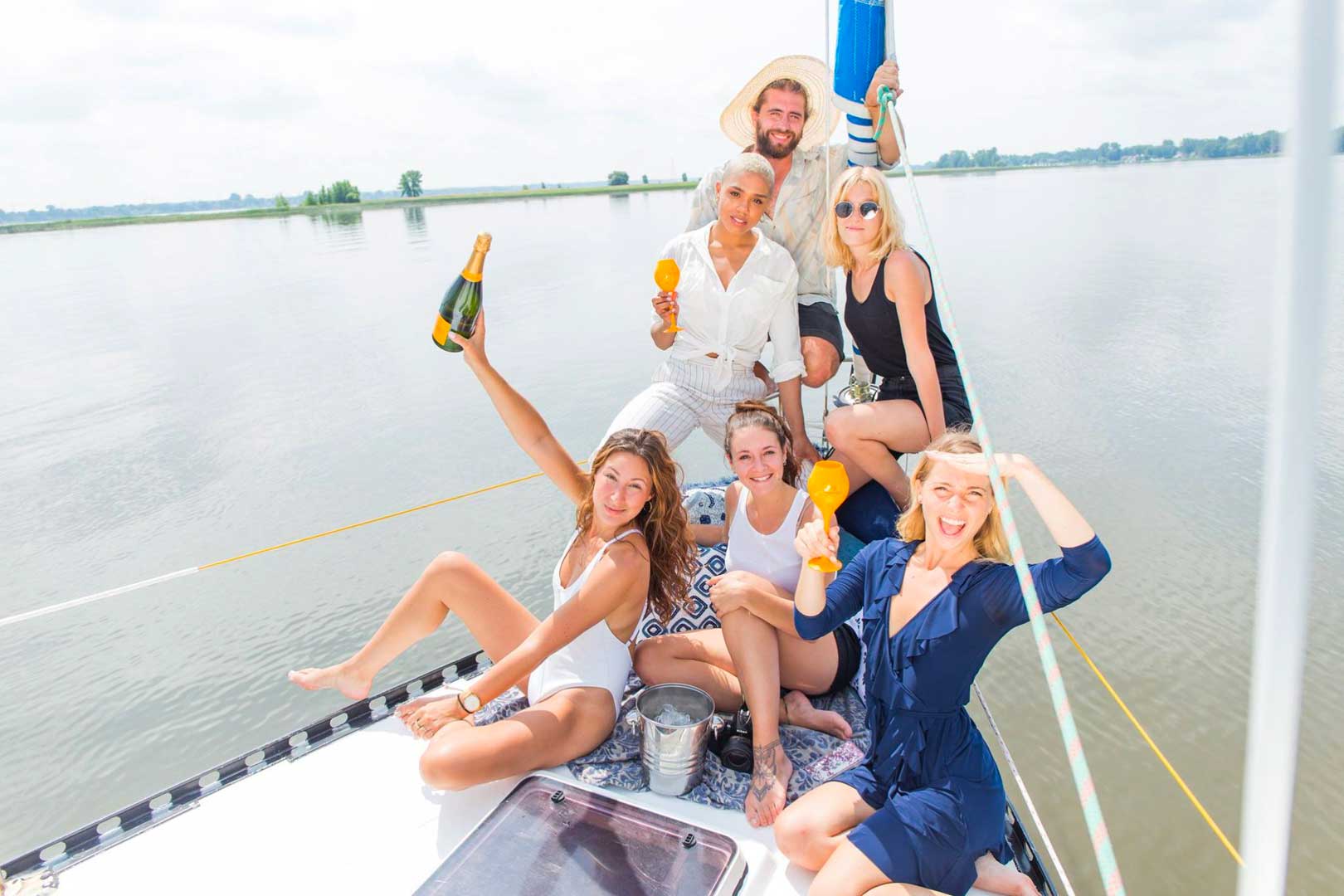 MANNY: Speaking of the captains of our agency, what makes a good captain?

PO: It takes self-control. You have to stay calm, not talk to people too harshly, be prepared and resourceful. But most of all, you have to be humble.

PO: Give it all you’ve got. It won’t help anyone if you do things halfway. In life, those who work hard reap the rewards.

And so ended our interview. It’s getting late here, but PO asked if there are still people around. Of course he knows that there would be.

So I took my laptop and brought PO with me around the offices, where he got to meet the new employees and say hi to those with whom he had worked. Everyone was happy to finally hear from him after five months at sea. While the others enjoyed their virtual reunion with PO, something he said during the interview resonated with me:

“Courage is knowing that there’s a risk and doing it anyway.” 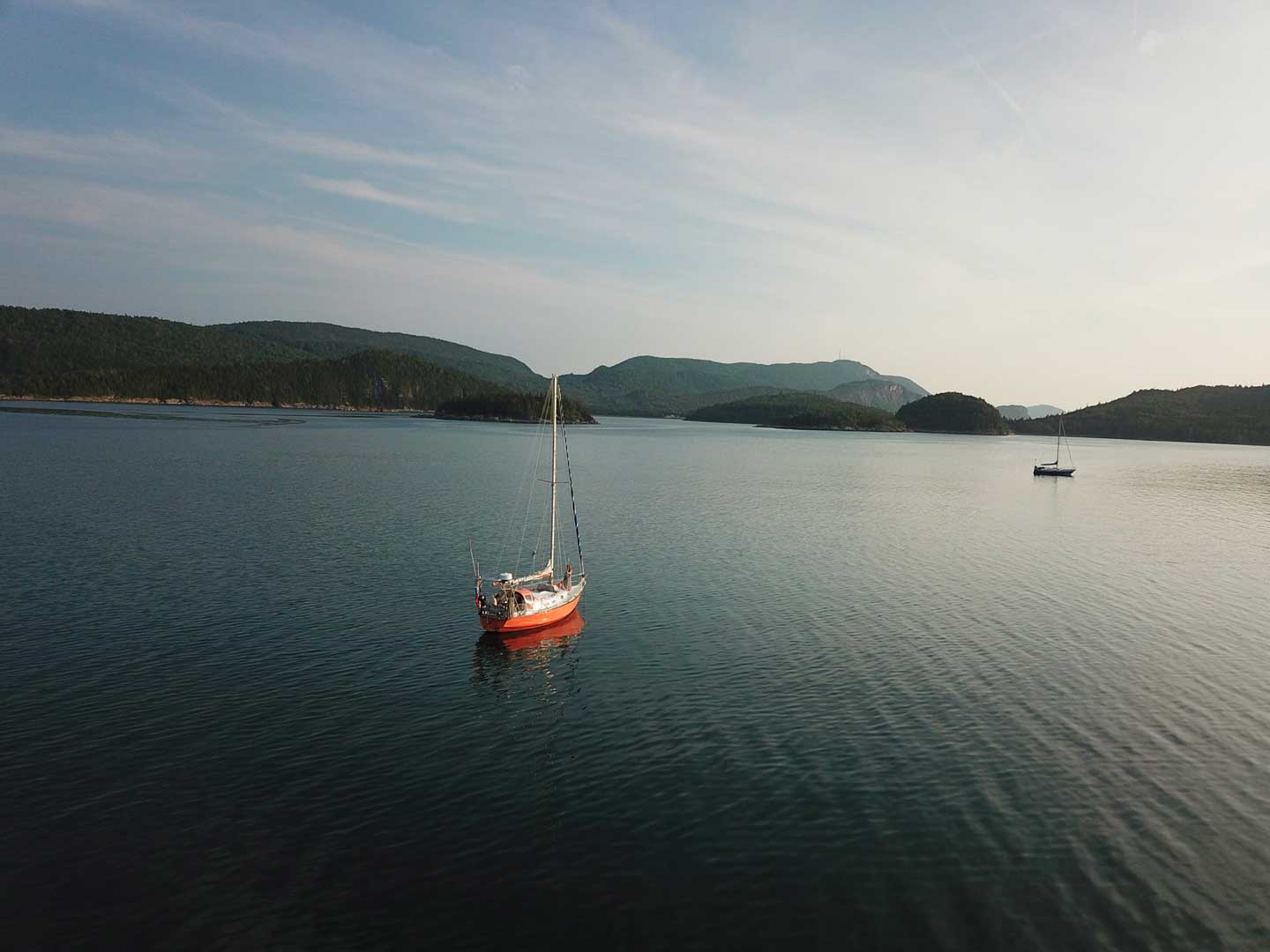 If you want to help PO and Héra repair Loréline’s engine and continue on their inspiring adventure with Léon Martin, you can contribute to their Patreon page here: https://www.patreon.com/levoilierorange Catherine Foisy : "I want to deconstruct gender stereotypes in advertising." 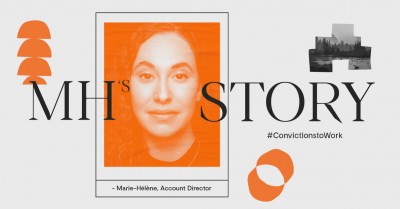 Marie-Hélène Leclerc: "I want to build transparent and sincere relationships." 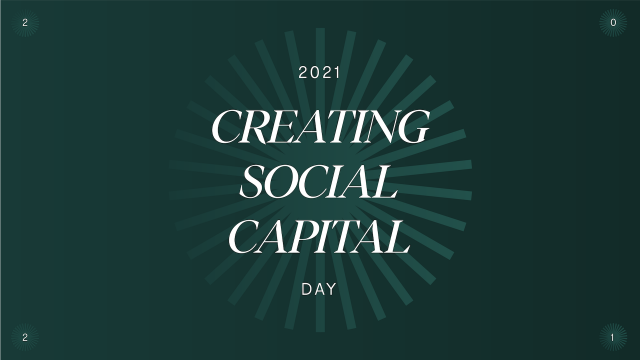 Republik empowers its employees to define its impact strategy